Trust but Verify: Your Ultimate Guide to Understanding (and Defeating) Bias In Hiring

Almost everyone relies heavily on cognitive biases (preconceptions that our brains hold to be true without supporting facts) and heuristics (mental shortcuts that lead us to make snap judgements.)

We trust these processes that our brain uses daily, and most of the time, things turn out OK. However, when we rely on them in recruiting, the result is often poor Quality of Hire. In other words, we end up hiring people who perform poorly on the job.

Why do our “instincts” let us down so badly when we are making assessments of other people?

Recruiters and hiring managers are likely to run across small pieces of information - true or false - during the employee screening process, which trigger a heuristic. They trust their gut instead of verifying that the information is backed up with facts.

You simply can’t automatically believe anything a job applicant puts down on their resume.

According to ResumeBuilder, one- third of Americans have admitted to lying on their resume at least once, and the higher their earning bracket, the more likely they are to have lied.

If your recruiting team has been taking resume information at face value, it’s time to take a step back and look at how cognitive bias and heuristics is affecting your hiring process.

Here are the most common heuristics and biases that can lead to poor Quality of Hire:

What Is Ingroup Bias?

Ingroup Bias means we are predisposed to like and trust people who we perceive as being similar to us - in our group, as it were.

It’s an automatic action for humans to seek out others who are like them. When we see someone who is similar to ourselves, our brain sorts them into our own group, and we trust them more, even though we have no solid proof that they deserve that trust.

It's incredibly easy to fall victim to ingroup bias. All it takes is finding one commonality with the candidate you are screening or interviewing, such as:

What is the Mere-Exposure Effect?

The mere-exposure effect takes place when you’re exposed to something over and over. Your brain decides the thing or person you are exposed to must be good, because people remember to develop trust and affinity for things that have become familiar.

The more you’re exposed to something, the more you start to assume it is trustworthy. This is why ads are so repetitive; simply showing people the same product over and over produces familiarity. The constant exposure literally rewires neural pathways, subliminal convincing you that you should trust what you see and hear.

Examples of the Mere-Exposure Effect

You can get exposure to a candidate in many different ways, especially if the talent pool for a specific position is small and the community of experts working in it is tight. The candidate may: 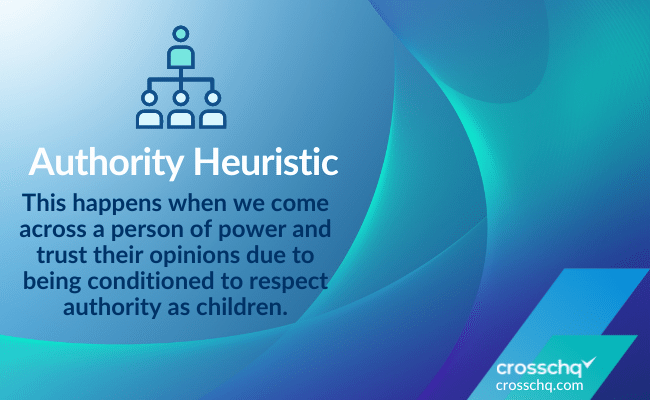 What is the Authority Heuristic?

The authority heuristic relies on the fact that we are taught to respect authority from a young age. This means that, when faced with a person in a position of power (meaning they have authority, expertise, influence) who holds opinions on a certain subject, we regard those opinions as automatically trustworthy.

Our brains accept that legitimate authorities have achieved their positions through superior experience, skill, wisdom or power. This mental shortcut allows us to utilize the knowledge of these experts so we don’t have to work as hard or take responsibility for choices or actions, since we can simply point to the authority as our back-up.

Examples of the Authority Heuristic:

We’re more likely to take whatever someone says, does, or claims at face value if they:

What is the Bandwagon Effect?

The bandwagon effect takes place when we “follow the herd”, putting our trust in whoever is at the head of the line because so many other people have put their trust in them first. Our brain automatically assumes there is safety in numbers, and that going with the flow is the safest and best choice.

Whenever we see a group we want to be a part of, social proof kicks in. The innate need to feel like we belong leads us to follow the crowd and conform. We want to be part of the “in crowd” so badly that we will ignore or override things we already believe or know to be true simply to become part of the whole.

Examples of the Bandwagon Effect

We are more likely to jump on the figurative bandwagon and take a liking to a candidate of they:

What is the Scarcity Heuristic?

The scarcity heuristic kicks in when it is perceived that something is in short supply (like worries over toilet paper availability during a pandemic.) As the number of items available becomes more limited, the perceived value of those items increases. Because it is becoming scarce, our brain makes the mental leap to assuming we need it.

When there are limited resources, the heuristic trigger goes off in our brain. This flips a switch that shines a spotlight on the resource, and makes it seem extremely attractive and in high-demand. Our subconscious starts sending out an alert that we are about to miss out on something we can’t live without.

Examples of the Scarcity Heuristic

We are more likely to get anxious and make a poor hiring choice due to the scarcity heuristic when:

It’s tempting to take what someone you like or feel connected to says at face value, but in recruitment, you can’t lead with your gut and hope for the best. With the average cost to replace an employee being six to nine months of their salary, there is too much on the line for the company.

Here are four ways you can verify candidate information given in the interview process, and improve your hiring savvy:

Don’t just let the interview “go where it will.” While there is room at the end of an interview for a free-form conversation, the bulk of the interview should be focused on probing into the candidate’s skill sets and attributes to see where they match to the job requirements and the team already in place.

Make a list of baseline questions you can ask each candidate so you have the ability to compare answers, and do your best to make each interview a collaborative one. More than one interviewer gives you a more balanced look at the candidate when you're comparing notes.

The traditional reference check just doesn’t give you the data you’re looking for. You need the real truth about how your candidates performed in their previous positions to make an informed hiring decision.

Taking the process and making it more interactive, starting with the candidate themselves, can yield high-value information. This approach makes it easy for candidates to be compared against each other on a level playing field.

It can sometimes feel awkward to inform a candidate that you’ll need to conduct a background check, especially if you and they have hit it off in the interview. However, failing to complete this step can land you and the company in hot water.

Instead of treating it like a necessary evil, keep things matter of fact. Background checks protect everyone, and it’s just another box to check off the list before making an offer. Ideally, you’ll only be performing background checks on finalists for any given position.

Be smart about aptitude tests

It can be oh, so tempting to make all of your candidates take a stack of aptitude tests and let those results “pick” your new hire, but these tests have their own built-in biases and pitfalls. Additionally, too many tests can mean top talent opts out of the hiring funnel, unwilling to invest more of their time.

Aptitude tests can also fail to provide clear correlation with the most important recruitment metric: Quality of Hire. In fact, Crosschq Data Labs findings reveal that certain types of pre-hire assessments literally returned results the opposite of what was expected: the higher a candidate scored pre-hire, the worse they performed in their role post-hire!

It is critical to use evidence-based analysis when evaluating what assessment tools are best for your company. Whatever tests you are currently using, take another look at the results and how they tie back to new hire productivity.

For those who scored highly on the test(s), did they subsequently perform well at your organization? If not, it’s time to find a better way of assessing candidates. Assessing Quality of Hire in new employees can help you build better candidate profiles based on solid post-hire data.

To learn more about Quality of Hire, download our most recent report which analyzes over 24M hiring insights. To find out how Crosschq can help you defeat bias in hiring, talk to one of our team experts today.