A new study finds interviewees are convinced appearance can influence perceptions of their competence and many worry their appearance could affect their chances of getting the job.

SAN FRANCISCO, Feb 4th, 2020 – Should you do an interview in person or via Zoom or Skype? Few can land a job without enduring the intimidating and dreaded interview process. In the world of glass half full, the only response to the inevitable post-chorus of “How’d it go?” is a resounding “Great!” But for many, “I’m not sure” is the best they can muster. Invariably, what you’re saying aloud is dramatically different from what’s inside your head.

A new report from JDP surveyed almost 2,000 people about their interview experience, how they prepped, and what happened during the interview.

The results of the report, “The Experience of Interviewing in 2020,” confirmed long-held beliefs, notably in gender dynamics, where statistics reveal perceptions between men and women indeed differ.

Pants on fire
One in three interviewees admit to lying about their personal life in a job interview, and one in three have hidden something on social media.

But another hirer says interviews are losing their effectiveness, and that someone who does well in an interview may not be a great employee, “That is why organizations are moving towards testing a candidate’s characteristics by conducting personality tests and skills assessments,” said Matt Thomas, president of WorkSmart Systems. 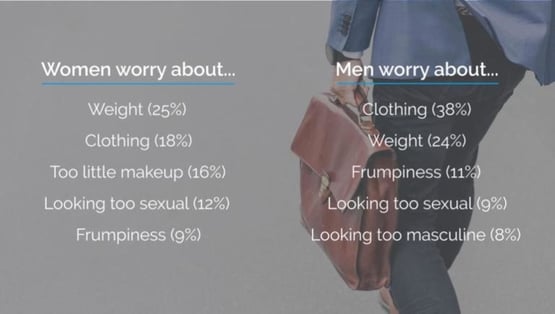 In the eye of the beholder
The majority of respondents (88%) believe appearance can influence others’ perceptions of competence, so it should come as no surprise that 86% feel it’s important to look physically attractive in an interview.

“Appearance in today’s landscape can be a very slippery slope but highly important,” said Tony Boyle, president and CEO of HRdownloads Inc., but it’s an issue that doesn’t hold much importance to Boyle.  “In today’s diverse workforce, some of the greatest creative talent I have ever hired didn’t fit the status quo in the dress code department, which is precisely why I employ the no dress code policy in all my companies.”

On average, respondents spent more than an hour thinking about, shopping for, or picking out an interview outfit.

For those candidates putting excessive energy into an outfit, Susan Schimek, director HR at Dinova suggests “business casual is a good bet,” and warns candidates to forgo scent, citing too much cologne and a strong smell of cigarettes has been off-putting for her.

While “being neat” is critical, said Ashley Fernandez, a career transition coach, “Can you be an outstanding candidate that has bright colored hair, piercings or tattoos? Sure you can. Interviews should not be based on looks or bias. Appearance doesn’t matter but the confidence a candidate portrays does.”

On the other hand, 63% believe they’ve benefited from their appearance in an interview.

Competent or liked?
Another category in which men and women have different opinions is how 86% of all interviewees prefer to be seen as competent more than likable.

“Most people say they prefer someone competent, but in fact reveal themselves to prefer likeability,” said Joseph Quan, co-founder and CEO of the analytics software company Twine. “It’s human nature; we gravitate towards people who make us feel comfortable. The hard part about hiring is trying to take that personal bias out of the equation, and making a determination about who will do the best job.”

“So I generally prefer competence,” Quan concluded. “At the same time, you can’t separate personality and cultural fit from that assessment. You need to keep in mind that this is someone you’ll be working with every day of the week. They don’t need to be your best friend, but if you can’t establish a rapport, communication and productivity will suffer.”

Not speed dating
One in five of those interviewed said they’ve been flirted with during an interview, and there’s a significant difference between genders, and how they respond: 58% of women flirt back, but 71% of men said they flirt back.

Getting personal
An interviewer’s primary responsibility is not to make a candidate feel comfortable, but the interviewer should keep conversation flowing, and keeping questions appropriate.

One in three are uncomfortable discussing their personal life in interviews.

But comfort in general is also divided between genders: 71% of men say they are comfortable, but only 57% of women claim the same.

Invasion of privacy
While candidates are preoccupied with putting their best self forward, the study reveals many interviewers bring up topics considered illegal: 37% of women were asked about plans for children, compared to 27 % of men. According to the report, children are a sensitive topic, especially for women; 50% of women worry children can impact others’ views on their productivity.

“Although in some cases it can be a way to connect with the interviewer, generally speaking, [personal questions are] not a necessary component of the interview process,” said Nate Masterson, HR manager, Maple Holistics.

But some interviewers find value in more prohibitive questions, “Any question that helps predict job embeddedness is helpful,” said Mike Fitzsimmons, Crosschq co-founder and CEO,  “To this end, ‘personal’ questions can be very predictive in determining long term tenure.”

Still, NY-based attorney Aaron Messing, who specializes in counseling companies on employment, said, “Recruiting and interviewing can expose employers to potentially significant legal liability, and it is important to ensure that interviewers are aware of what questions or decisions are inappropriate or discriminatory.”

“While polite personal conversation is appropriate, even inadvertent questions about a protected characteristic (e.g., age, religion, origin, medical history, marital or family status, etc.) can be grounds for a discrimination claim. It’s easy to cross the line indirectly,” Messing said if you ask a graduation year or if they have children, it “can suggest age bias or marital/family status bias. Try to limit interview questions to those that reasonably related to the job opportunity.” 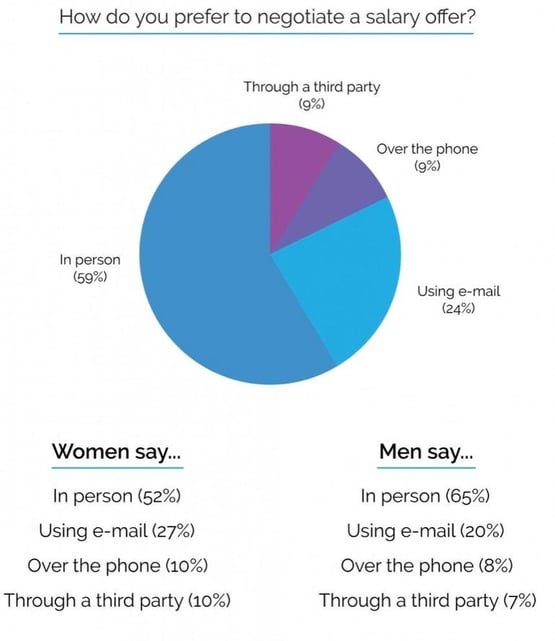 Money, money, money
In social situations, discussing money is uncouth, but while it’s still a sensitive subject, the study shows that both men and women are equally comfortable negotiating offers…if given the chance, because only two in five (41%) candidates negotiate each offer received.

Seriously? Phones off!
Lastly, while this seems like common sense, “Candidates need to silence their phones, smartwatches and other devices during interviews,” Schimek said. “I’m still surprised when I see a candidate glance repeatedly at their phone or watch during an interview.  It’s bad manners and, if you can’t focus on the interview, how can I expect you to focus on the job?”

View All Articles
Back