4 Examples Of Unconscious Bias In Recruitment

Are your DEIB initiatives failing to bear fruit when it comes to changing the overall demographics of your workforce? Are you struggling to figure out why you don’t seem to have a range of representation despite a firm commitment to diversification and equity?

It’s subtle and easy to miss - that’s why it’s called unconscious bias - but it exists and colors our judgment in insidious ways. You can reduce unconscious bias in recruitment and improve your overall hiring practices by recognizing where bias is likely to pop up. Here are 4 examples of where to pay extra attention to unconscious bias.

When you create a job description, pay attention to the type of verbiage you use. Is your language gendered, even in subtle ways? Words like competitive and aggressive are coded masculine, often putting women off from applying; in fact, a 10% immediate drop in women applicants has been tied directly to masculine coded language used in the job description.

Fix: Use a tool like Gender Decoder to help ensure your job descriptions will attract applicants of all genders instead of the same gender the field or occupation may be dominated by.

Fix: Blind names from resumes when possible. This might mean setting up your ATS to put this data in a hidden field until the candidate screening process is over. Blinding resumes can help deal with proven unconscious bias, such as applicants with “white-sounding” names being 50% more likely to get hired, and both women and men showing a preference for male applicants.

When it comes time to get a feel about your candidates, traditional reference checking doesn’t cut it. There’s bias everywhere, from how men and women are likely to rank each other, to ethnicity and racial divides and how they impact ratings between mentor and mentee, or from coworker to coworker. Unstructured conversations leave plenty of room for unconscious bias to surface. 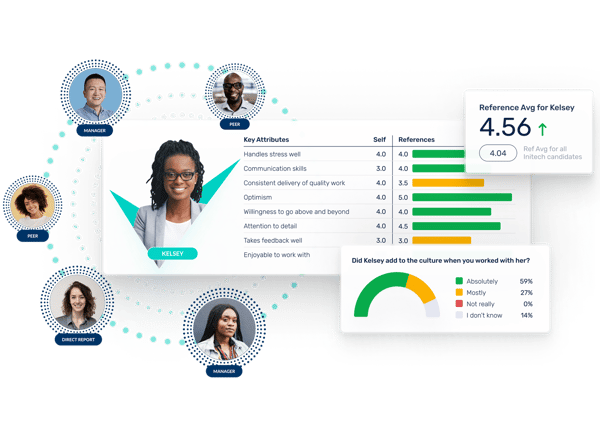 Fix: Use a candidate checking tool that provides a clear baseline by letting candidates rank themselves on basic skills and attributes, then compare their rankings to those submitted by former managers and peers. Crosschq 360 makes this process easy, fast, and digital for full compatibility with your ATS.

Finally, the interview is far too often used as a standalone criterion for hiring decisions. Unfortunately, this is where unconscious bias can be the strongest. A hiring manager who “vibes” with a candidate because they look, talk, act, or dress alike, or because they share irrelevant histories like a hometown, college, or sports team affiliation, may make a snap judgment based on how they feel.

Fix: Focus in on key candidate quality indicators during the interview, and when possible have each final candidate interviewee by a team or at least by several different people. This will help clarify what their real attraction is from a team perspective.

To get a Crosschq demonstration and learn how to balance risk and rewards in your own recruitment process, contact us today.

Topics from this blog: DEIB Recruiting